What inspired us for myEleusis.Repo?

The subsystem myEleusis.Repo is based on similar projects -national and international- on which the researchers of “Athena” Research Centre have worked in the past. State of the art technology regarding digital repositories and documentation of movable and immovable monuments were also visited. The team’s goal was to identify the needs of the Ephorate of Antiquities of West Attica in the framework of myEleusis and shape the structure of myEleusis.Repo so as to accommodate these specific needs. Since the Ephorate -the end-user of the repository- functions under the Ministry of Culture and Sports, it is already provided with a variety of digital documentation and dissemination systems and tools.

Some of the systems, used for documentation and dissemination, that inspired the team are the following: The Web Portal of Digital Collections of Movable Monuments of the Directorate for the Administration of the National Archive of Monuments, the project “Digital Collections” for movable monuments, the Greek National Aggregator for Digital Culture Content, and the Portal ODYSSEUS that provides information about archaeological sites, monuments and museums. Other repositories that the team visited to draw inspiration for the design of myEleusis.Repo were, among others, the Online Collection of the British Museum and the Data Base of the German Archaeological Institute.

With myEleusis.Repo teams aim to create a useful digital tool that will be enriched after the project ends, and will continue to serve either as a user-friendly repository -along with the existing ones- to cover the needs of the archaeologists of the Ephorate, or as a database from which users will draw and disseminate material, possibly through the rest of the subsystems of myEleusis (for example through thematic exhibitions within the virtual museum myEleusis.VM). 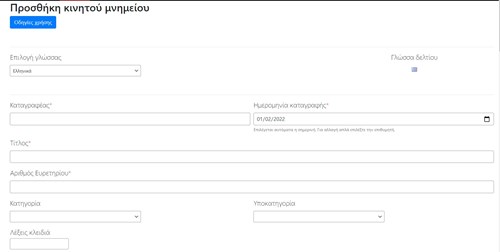 Great cooperation among team members is crucial in the implementation of myEleusis.Repo, which has been completed. Technology experts and archaeologists have managed to frequently provide each other with valuable feedback, thus contributing to the successful outcome regarding the subsystem.