The outer courtyard of Eleusis

The outer courtyard of the sanctuary is, in essence, the end of the Sacred Way and a place where a large number of visitors could gather to attend events open to the uninitiated. It has an irregular shape with a maximum length from southeast to the northwest that reaches 65 metres. The full width is about forty metres. The Sacred Way enters the courtyard from the northeast corner, behind the modern administrative building, and has similar paving to the courtyard. The paving should be dated to the Roman period when the Great Propylaea were erected (i.e. in the 170s) and was done with rectangular poros slabs. In addition to the individual buildings and temples, the courtyard would have been scattered with altars, from which few faint traces survive. These altars would serve the mystai who arrived from Athens during the procession of the Greater Mysteries for libations and preparatory rites. 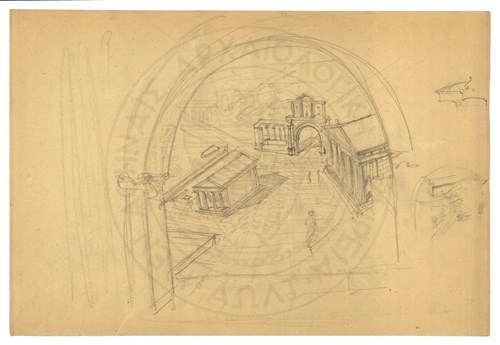 The temple of Artemis Propylaea and Poseidon Patroos (Father Poseidon) dominated the large, paved courtyard to the right of the Sacred Way. The temple was erected on a pedestal that was almost one metre above the courtyard floor and was made of Pentelic marble, except the roof (which was wooden) and the tiles (which were clay). It had an entrance with four Doric columns on the front and back, while the side walls protruded slightly and formed a relatively closed space in front of the nave, where the statues of the gods were kept. It is noteworthy that the Doric columns were monolithic, as the size of the temple did not require the construction of large columns that would need more than one piece.

Although we do not know the exact date of construction of the temple, the traveller Pausanias, who visited the sanctuary of Demeter in the middle of the second century AD, saw the temple, so its construction must be placed in an earlier period. It is also unclear why the temple does not align with the Greater Propylaea, as one would expect for Roman building projects. The building may have replaced an earlier temple, so respect for tradition would require the orientation to remain unchanged. But there is also the possibility that it is a conscious choice of the architects to make both sides of the building visible to the people who crossed the courtyard coming from the Sacred Way.

In antiquity, the altar was probably the most central point of worship, as the temple served more as a residence of the deity statue than as a place of rituals and ceremonies. Religious ceremonies took place outside, and the faithful entered the temple only to admire the cult statue. Since the temple of Artemis Propylaea and Poseidon Patroos served the worship needs of two deities, it is reasonable to assume that there would be two altars. 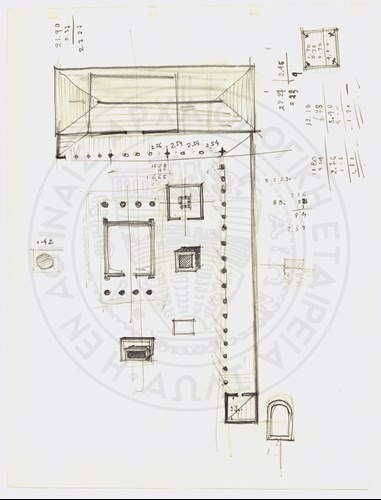 Indeed, the temple has two altars, one of which is located about four metres in front of the temple, towards the Sacred Way, while the other stands next to the temple to the northeast. It is unclear which deity owned which altar, but perhaps the first was dedicated to Artemis, with Poseidon enjoying the offerings made by the faithful on the side altar. The core of the “altar of Artemis” consists of small stones connected with plaster, while the outer lining was made of poros stone (but only in the parts that were not visible). The “altar of Poseidon'' survives in very poor condition. 1st (and last) image: The outer courtyard of the sanctuary in Eleusis / The Archaeological Society at Athens / Ioannis Travlos Archive

2nd image: Unknown: Plan of the outer courtyard of the sanctuary in Eleusis / The Archaeological Society at Athens / Ioannis Travlos Archive

4th image: The altars of the temple of Artemis Propylaea and Poseidon Patroos / The Archaeological Society at Athens / Ioannis Travlos Archive