The northern entrance of the precinct has always been the main access point to the sanctuary of Demeter. In the Roman period, when there was a general trend of architectural grandeur and impressive decoration of public buildings, the authorities decided to build a monumental gateway to replace the Propylaea built in the years of the tyrant Peisistratos (sixth century BCE). The new entrance is known as the Lesser Propylaea. The Latin inscription on the epistyle informs us that it was built during the magistracy of Claudius Appius Pulcher in 54 BCE. A letter by the Roman philosopher Cicero to Atticus in 50 BCE makes explicit references to Appius's intention to erect a propylon. Still, by the time Cicero wrote the letter, construction had not been completed.

The Lesser Propylaea is made of Pentelic marble on foundations of Roman concrete, lined with stones. In front of the gateway, there was a spacious courtyard enclosed on all sides except the north with a wall. The wide entrance (2.95 metres / 9.7 feet) was symmetrically placed at the courtyard's centre. The outer columned portico had two Corinthian columns, while the inner portico had two Caryatids supporting the roof. The columns were of medium height, but the capitals are masterpieces of sculptural art with winged animals (bulls or lions) in the corners. 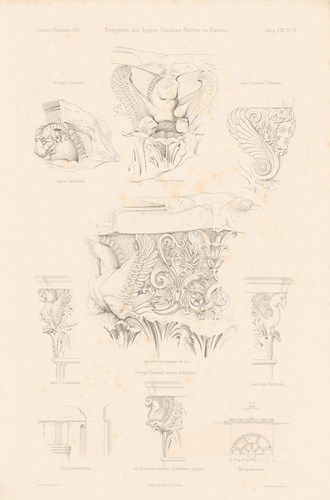 The entablature and the frieze consist of a single piece of Pentelic marble that combines Ionic and Doric elements. The frieze is formed by triglyphs and metopes where the artists carved some of the most characteristic symbols of the cult of Demeter (kiste, bundles of wheat, bucrania, poppy flowers). Their presence in the frieze, which was visible to the uninitiated, suggests that they were not part of the culmination of the initiation process, as this part of the Mysteries could not be made public. Pomegranates and crossed torches are also absent, but it is possible that they adorned part of the frieze that has not survived. The pediment above the frieze was undecorated.

The main entrance was closed with a heavy and bulky double-leaf door. The rectangular latches for the swivels can be seen in the inner corners of the opening. The parallel furrows that run through the opening (maintained at a length of almost three metres) were carved to facilitate the outflow of rainwater, which was in danger of pooling at this point descending from the Sacred Way that continues onwards to the Telesterion. 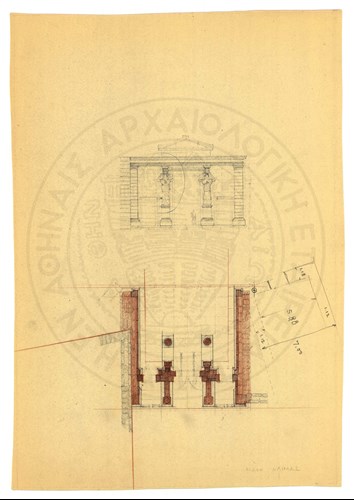 The inner side of the Lesser Propylaea also had a roof, but instead of columns, it was supported by two colossal Caryatids. Their bases remain in place, while only the upper part of the statues has survived. One Caryatid is located in the Archaeological Museum of Eleusis, while the other was transported to England in the early 19th century. The Caryatids represent Korai carrying on their heads the mysterious kiste. In its sculptural version, this cylindrical container is richly adorned with symbols of Demeter’s cult (poppies, sheaves of wheat, kernos, small rosettes that may represent pomegranate flowers, and a perizoma decorated with myrtle leaves tied with woollen threads representing Bacchus). The Caryatids wear a sleeveless tunic with a Gorgon on their chest. The statues are made of Pentelic marble. 2nd image: The Archaeological Society at Athens / Dimosthenis Ziro (1984): The main entrance to the sanctuary in the late 1st century BCE.