If the Athenians excelled at something, it was the introduction of new cults in Athens and their transformation into eminently Athenian religious experiences. The local cult of Dionysus in Eleutherae, on the border of Attica with Boeotia, entered the city during the time of Peisistratos, took deep roots and bore fruit in the City Dionysia, the large theatrical festival whose main events were the theatrical performances of dramatic tragedies and comedies. Something similar happened with the cult of Demeter after the subjugation of Eleusis to the rule of Athens. In honour of the Eleusinian deities, the Athenians established a spacious sanctuary on the northern slope of the Acropolis, just above the ancient Agora and right next to the Panathenaic Way. According to the excavation data, the City Eleusinion was surrounded by a wall with a single entrance, which usually remained closed to prevent the entry of animals and people that could defile the sanctuary. Inside the courtyard stood a temple of the early 5th century BCE with a nave and a small space that may have stored sacred objects. An altar and numerous votive inscriptions to Demeter and Kore were in the yard of the City Eleusinion. According to Pausanias, there was also a statue of Triptolemus, who was the first man to sow grain under the guidance of Demeter. 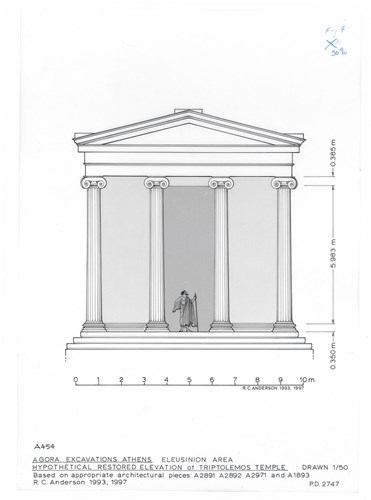 The City Eleusinion played an essential role in the political life of Athens, as the spacious courtyard was suitable for the sitting of the Boule. When the Peloponnesian War broke out, the inhabitants of Attica living in the countryside fled for safety within the walls. They occupied all the free open spaces and sanctuaries, except the City Eleusinion, which was well fenced and practically inaccessible. On the eve of the departure of the Athenian fleet for the great campaign in Sicily in 415 BCE, Alcibiades and dozens of other prominent Athenians mocked the Eleusinian Mysteries. They also destroyed Hermaic stelae (herms) and statues while roaming Athens drunk at night. The anger of their fellow citizens for the desecration of the secret rituals was terrifying, and severe punishments followed. Alcibiades was sentenced to death, while the property of his profane friends (houses, estates, vineyards, animals, slaves, furniture, household utensils, and large quantities of figs, olives, and grapes) was confiscated and sold. The sellers set up records with the articles sold and the profits realised to the City Eleusinion. In addition to its role in celebrating the Greater Mysteries, the City Eleusinion was also the focus of another essential annual religious festival in honour of Demeter and Persephone. The Thesmophoria took place about a month after the Mysteries when the sowing began in the middle of Pyanepsion (end of October). The Thesmophoria was an exclusively female holiday aimed at protecting the fertility of the earth and the people. The focus of the celebration was the throwing of piglets in gaps or cavities in the rock (the so-called “megara”) and the collection of the decomposed remains that were then offered at the altar of Demeter. During Thesmophoria, the sanctuary of the City Eleusinion remained closed to the public. Only the women participating in the festival entered to perform the necessary acts of worship undisturbed.