The acropolis of Eleusis

The oldest confirmed settlement of Eleusis was founded around 2000 BCE on the top of the hill, which rises above the sanctuary of Demeter. The buildings were elongated megaron-type or rectangular, vaulted constructions with a rather macabre peculiarity: children were often buried under the floors or between adjacent buildings' walls. Adults were buried on the north side of the hill, in the so-called “Western Cemetery”. Most graves contained no funerary offerings. Therefore the community was either too poor to afford a lavish expenditure on the dead or held views on death that were incompatible with funerary offerings. The vessels found in the settlement and some tombs are monochrome (grey, black, or yellow) or have linear designs in dull colours.

This settlement was destroyed by fire around 1580 BCE, but the inhabitants immediately built a new settlement that extended over the hill's southern slope towards the sea. As the population grew, the buildings spread to the north and east sides of the hill. We assume that the community was protected by walls on the hill's edge, although no remains survive. The beginning of the cult of Demeter is usually dated to this period with the construction of a large building on the site of the future Telesterion. House designs and burial customs remained unchanged, but vases were decorated with typical Mycenaean motifs inspired by the natural world (leaves, flowers, spirals, schematically-rendered birds and sea animals).

The end of the 12th century ushered into a period of dramatic population decline and the (possible) complete abandonment of the Mycenaean settlement. The causes of this dramatic development remain obscure, and it is not clear whether we are dealing with sudden destruction or gradual decline. Two centuries later, though, Eleusis was reborn, albeit on a much smaller scale. In the old settlement, next to the sea, a new cemetery was established, which gradually evolved into the famous “ancient Eleusinian necropolis”. Eleusis slowly became one of the most important settlements of Attica on account of the sanctuary’s growing popularity. The tradition of burying the dead continued, but almost a third of the population seems to have opted for cremation. Clay vessels remain the most common funerary offerings, but in some cases, the dead took with them gold jewellery, bronze buckles, and Egyptian-style figurines and scarabs.

Social and political upheavals mark the seventh century. The citadel remains the main residential area for the Eleusinians, although the population (especially children) suffers significantly from famine and epidemics. After a prolonged conflict, traces of which survive in the myth, Eleusis finally became part of the Athenian state and benefited from the ambition of Peisistratus to incorporate the sanctuary of Demeter into Athenian propaganda. The acropolis of Eleusis was fortified with a strong wall reinforced with defensive towers. In the last decade of the 6th century BCE, Eleusis became one of the tribes comprising the Hippothontis phyle and entered a long period of political stability and artistic progress. 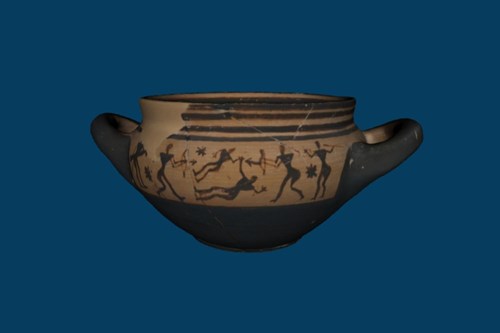 2nd image: Plan of the Western Cemetery / The Archaeological Society at Athens

4th image: Middle Geometric vessel with a representation of a ship / Archaeological Museum of Eleusis

5th image: Vessel dating to the Middle Geometric period with a representation of a hoplite battle / Archaeological Museum of Eleusis