The Greek historian Plutarch revealed that the Athenians celebrated three annual sacred ploughings. The first took place upon a spot called Scirum or Skiron, the second in the Rharian field near Eleusis, and the third near the walls of Athens on a location known as the Bouzegion (Ox ploughing). The first ploughing happened in the last month of the Attic calendar, called Skirophorion, which correlates to late May - late June of the Gregorian calendar. The agricultural year was coming to an end, and farmers were busy cutting and threshing the grain or ploughing the fields to bury the stalks left behind after collecting the corn. As they prepared the land to receive the new seeds when the first rains arrived in the fall, the Athenians celebrated the dissolution of the old year in a festival that inverted the standard order. The Skira or Skirophoria took place on the 12th day of Skirophorion. The word “skira” means “white clay”, but the connection between the word and the festival’s events is unclear. The festival was held in honour of Demeter, Persephone, Athena Skiras, and Poseidon Phytalmios. On the day of the celebration, the priestess of Athena and the priests of Poseidon and Helios (personification of the sun) marched from the Acropolis to Scirum, near the Sacred Way. According to a mythological tradition preserved by Pausanias, the local hero Phytalus welcomed Demeter to his house in Scirum and received the first fig tree as an expression of divine gratitude. 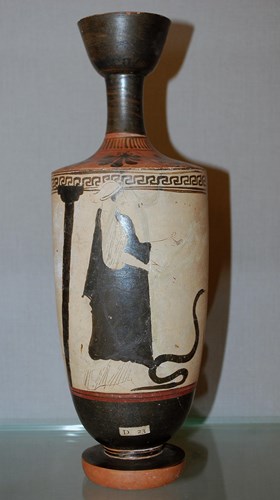 The priestess and priests walked under a ceremonial canopy called the “skiadeion” that would symbolically protect the fields and the city from the relentless summer heat. The skiadeion would also ensure the fertility of the land in the coming months. In addition, the procession brought the “skira”, sacred objects probably consisting of cakes in the shape of snakes and phalluses, pinecones and branches, and other magical symbols. Another potent symbol carried along was the famous “kodion”, the fleece of a black ram sacrificed to Zeus to appease the gods and free the mortals from any polluting impurities. It was the responsibility of members of the noble genos of the Eteoboutadai to carry the kodion. The Eteoboutadai also provided the high priestess of Athena and the priest of Poseidon. Hence, their participation in the procession was an expression of respect and compliment towards the goddess Demeter. At the same time, the presence of the priest of Poseidon is associated with his role as the forefather of the Eumolpidae, the greatest Eleusinian genos.

Men and women experienced the festival differently. They both fasted, but men considered Skira a day of general licence and an excellent opportunity to spend time with their friends playing dice games. For women, though, the festival was an exceptional time. The celebration allowed them to leave the women’s quarters and gather according to ancestral custom at a female shrine where they set up tents, sacrificed to the gods, and refrained from sexual activities. Philochorus, a historian and Atthidographer of the 3rd century BCE, informs us that women ate garlic intending to abstaining from sex “so that they would not smell of perfume”. In a day of general dissolution, domestic order and marriage were abolished, a feature so prominent that Aristophanes used the day of the Skira as background in the comedy Ecclesiazusae for his famous women’s plot to form an assembly and overthrow male domination.