The statue of the Fleeing Maiden depicts a female figure moving forcefully to the left. Made of Pentelic marble, the statue was found in 1924 near the Sacred House. The figure is smaller than life-size since its height barely reaches 0.65 meters (2.13 feet). She wears a peplos without a belt, an attire reasonably typical of young girls at the time. The movement of the right leg creates numerous parallel folds in her dress, while the himation is folded on her right arm and would have also been similarly wrapped around the left arm if the latter survived. The diadem on her head symbolises her noble or even divine origin. The holes in the back of her head would have accommodated additional curls of hair (also gone). 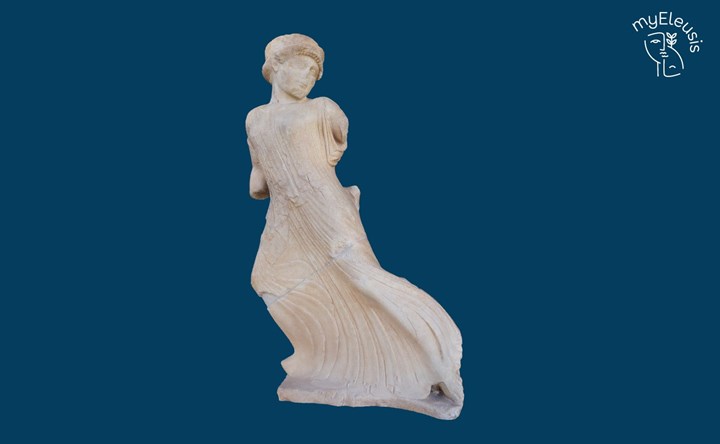 The two-dimensional rendering of the figure and the movement that seems parallel to some plane in the background imply that the sculpture was designed to adorn a pediment. The back is plain and without details; therefore, it was probably invisible from the ground. The statue may belong to the pediment of a small building erected in the Archaic period on the ruins of the older Sacred House.

The architectural decoration was probably inspired by a seminal episode of the Eleusinian mythological circle, namely the rape of Persephone. The Fleeing Maiden may represent the Kore who attempts to flee Hades. Alternatively, she may be one of the Oceanids, “who wear their waistbands slung low”, and accompanied Kore in the Nysian field when Hades abducted her. If she is indeed one of the daughters of Okeanos, her movement can be interpreted as an attempt to escape the sight of the violent abduction that would have been taking place in the centre of the pediment. The absence of fear or agony in the girl’s facial expression can be attributed to the artist’s desire to preserve the beauty of the Kore to the detriment of a naturalistic rendering of the episode.

A recent theory argues that the sculpture depicts Hekate, the goddess who held two torches (that no longer survive) to illuminate Persephone's path on her return from the Underworld. The statue belongs to the first decades of the fifth century BCE when Athenian sculptors embarked on a transition from the art of the Archaic Period to the new style of the Classical Age. The pediment was probably destroyed during the Persian invasion of Attica in 480 BCE.

Image 2 source: The Archaeological Society at Athens // The “Sacred House” in Eleusis

Image 4 source: The British Museum // The Painter of London: Hekate (circa 430 BCE)